“This is accurate in history, but I can’t breathe,” Stone said in an interview.
Emma Stone witnessed the pain of the beauty of The Favorite.

For her first “corset role” – part of her first time wearing a corset – Stone said she wore underwear for the 18th century historical drama that took place in the UK.

She praised fashion designer Sandy Powell, who added, “This is historically accurate, but I can’t breathe,” said an interview on the Graham Norton show on Friday. Stone said she would smell menthol “which made me feel like I was in a vast space,” and then “returned to breathe” during the first month of shooting.

“After about a month, my organs were displaced because they had to do this,” Stone said. “This is only temporary, but it is very serious.”

She continued, “The lower part of my stomach, no matter what, I am not a doctor, no matter where it is, it is like this, I guess my ribs are still paralyzed.” Stone added that her organs returned to normal.

The actress who played Abigail didn’t have a sloping plate. She couldn’t sit while wearing a corset, so she had to lean against the sofa at a strange angle.

“To be honest, women have existed for such a long time. This really gives you a lot of sympathy for that period, what have you experienced?” She said with a smile. “So if you don’t, don’t do it, but I Very grateful.”

Melissa McCarthy, who appeared on the stage with the stone, exclaimed when he heard how the organ of the stone moved, “What!”. Show guests Eddie Redmayne and Jude Law.

Redmayne said he could contact because he did a lot of work in a corset. “Many,” he said, including Viola, who made Shakespeare’s “Twelfth Night,” and Mark Rylance as Olivia. “[Designer] made these corsets, and if they were the 16th century whale bones, he tightened me. He wore a corset all his life, basically his body has entered this extraordinary The thing,” Redmayne said. “So I expressed some sympathy for these actresses.”

By Olivia Coleman as Queen Anne, Rachel Weitz as Lady Sarah, The Favorite will open on November 23. 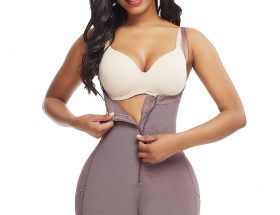